One day as Jesus was standing by the Lake of Gennesaret, the people were crowding around him and listening to the word of God. 2 He saw at the water’s edge two boats, left there by the fishermen, who were washing their nets. 3 He got into one of the boats, the one belonging to Simon, and asked him to put out a little from shore. Then he sat down and taught the people from the boat.
4 When he had finished speaking, he said to Simon, “Put out into deep water, and let down the nets for a catch.”
5 Simon answered, “Master, we’ve worked hard all night and haven’t caught anything. But because you say so, I will let down the nets.”
6 When they had done so, they caught such a large number of fish that their nets began to break. 7 So they signaled their partners in the other boat to come and help them, and they came and filled both boats so full that they began to sink.
8 When Simon Peter saw this, he fell at Jesus’ knees and said, “Go away from me, Lord; I am a sinful man!” 9 For he and all his companions were astonished at the catch of fish they had taken, 10 and so were James and John, the sons of Zebedee, Simon’s partners.
Then Jesus said to Simon, “Don’t be afraid; from now on you will fish for people.” 11 So they pulled their boats up on shore, left everything and followed him. 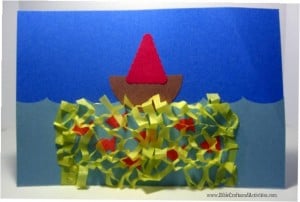 This craft to illustrate the miraculous catch of fish is made using paper punches to create the waves, boat, and fish.  The tissue paper fishnet was adapted from a fishnet party backdrop tutorial found with this post at The Party Studio.

For my net I used a 4″ x 5″ piece of yellow tissue paper folded in half three times until it is a little less than 1″ wide.  Then cut as shown in the illustration below.  Cut from both sides without stopping just short of the other edge.  Carefully unfold and stretch the paper net over the fish in the water.  Use a glue stick to add a line of glue where you want to place the each edge of the net and gently push the edges of the net onto the glue.

The Parable of the Lost Son

20 So he got up and went to his father.
“But while he was still a long way off, his father saw him and was filled with compassion for him; he ran to his son, threw his arms around him and kissed him.
21 “The son said to him, ‘Father, I have sinned against heaven and against you. I am no longer worthy to be called your son.’
22 “But the father said to his servants, ‘Quick! Bring the best robe and put it on him. Put a ring on his finger and sandals on his feet. 23 Bring the fattened calf and kill it. Let’s have a feast and celebrate. 24 For this son of mine was dead and is alive again; he was lost and is found.’ So they began to celebrate. 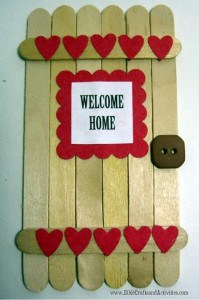 My favorite image from the story of The Prodigal Son is of the father running to meet his son.  I love this old song from Benny Hester:  When God Ran.

With this craft I wanted to emphasize the “welcome home” the father gave to his returning son.  This door was created with two different sizes of craft sticks adhered together with white glue.  We added a welcome home greeting and a button for a door knob.  You can decorate yours with paper punch shapes or stickers.  I added the verses above to the back.  You can download the printable for the door sign and scripture verses here.

35 That day when evening came, he said to his disciples, “Let us go over to the other side.” 36 Leaving the crowd behind, they took him along, just as he was, in the boat. There were also other boats with him. 37 A furious squall came up, and the waves broke over the boat, so that it was nearly swamped. 38 Jesus was in the stern, sleeping on a cushion. The disciples woke him and said to him, “Teacher, don’t you care if we drown?”
39 He got up, rebuked the wind and said to the waves, “Quiet! Be still!” Then the wind died down and it was completely calm.
40 He said to his disciples, “Why are you so afraid? Do you still have no faith?”
41 They were terrified and asked each other, “Who is this? Even the wind and the waves obey him!”

These simple story cards are created using clip art images added to folded index cards.  The children can easily see the changes Jesus made in the weather and the water as well as retell the story to their families.  Download the printable to create your own set here.