Some time after this, the cupbearer of the king of Egypt and his baker committed an offense against their lord the king of Egypt. 2 And Pharaoh was angry with his two officers, the chief cupbearer and the chief baker, 3 and he put them in custody in the house of the captain of the guard, in the prison where Joseph was confined. 4 The captain of the guard appointed Joseph to be with them, and he attended them. They continued for some time in custody.

5 And one night they both dreamed—the cupbearer and the baker of the king of Egypt, who were confined in the prison—each his own dream, and each dream with its own interpretation. 6 When Joseph came to them in the morning, he saw that they were troubled. 7 So he asked Pharaoh’s officers who were with him in custody in his master’s house, “Why are your faces downcast today?” 8 They said to him, “We have had dreams, and there is no one to interpret them.” And Joseph said to them, “Do not interpretations belong to God? Please tell them to me.”

9 So the chief cupbearer told his dream to Joseph and said to him, “In my dream there was a vine before me, 10 and on the vine there were three branches. As soon as it budded, its blossoms shot forth, and the clusters ripened into grapes. 11 Pharaoh’s cup was in my hand, and I took the grapes and pressed them into Pharaoh’s cup and placed the cup in Pharaoh’s hand.” 12 Then Joseph said to him, “This is its interpretation: the three branches are three days. 13 In three days Pharaoh will lift up your head and restore you to your office, and you shall place Pharaoh’s cup in his hand as formerly, when you were his cupbearer. 14 Only remember me, when it is well with you, and please do me the kindness to mention me to Pharaoh, and so get me out of this house. 15 For I was indeed stolen out of the land of the Hebrews, and here also I have done nothing that they should put me into the pit.”

16 When the chief baker saw that the interpretation was favorable, he said to Joseph, “I also had a dream: there were three cake baskets on my head, 17 and in the uppermost basket there were all sorts of baked food for Pharaoh, but the birds were eating it out of the basket on my head.” 18 And Joseph answered and said, “This is its interpretation: the three baskets are three days. 19 In three days Pharaoh will lift up your head—from you!—and hang you on a tree. And the birds will eat the flesh from you.” 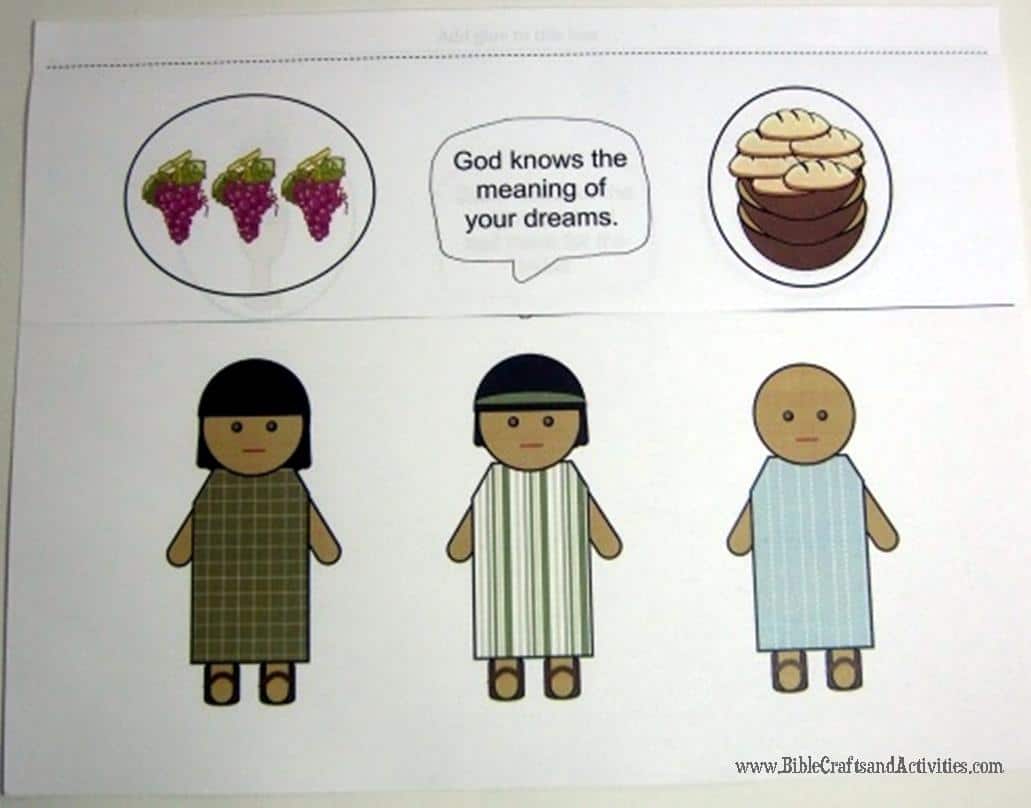 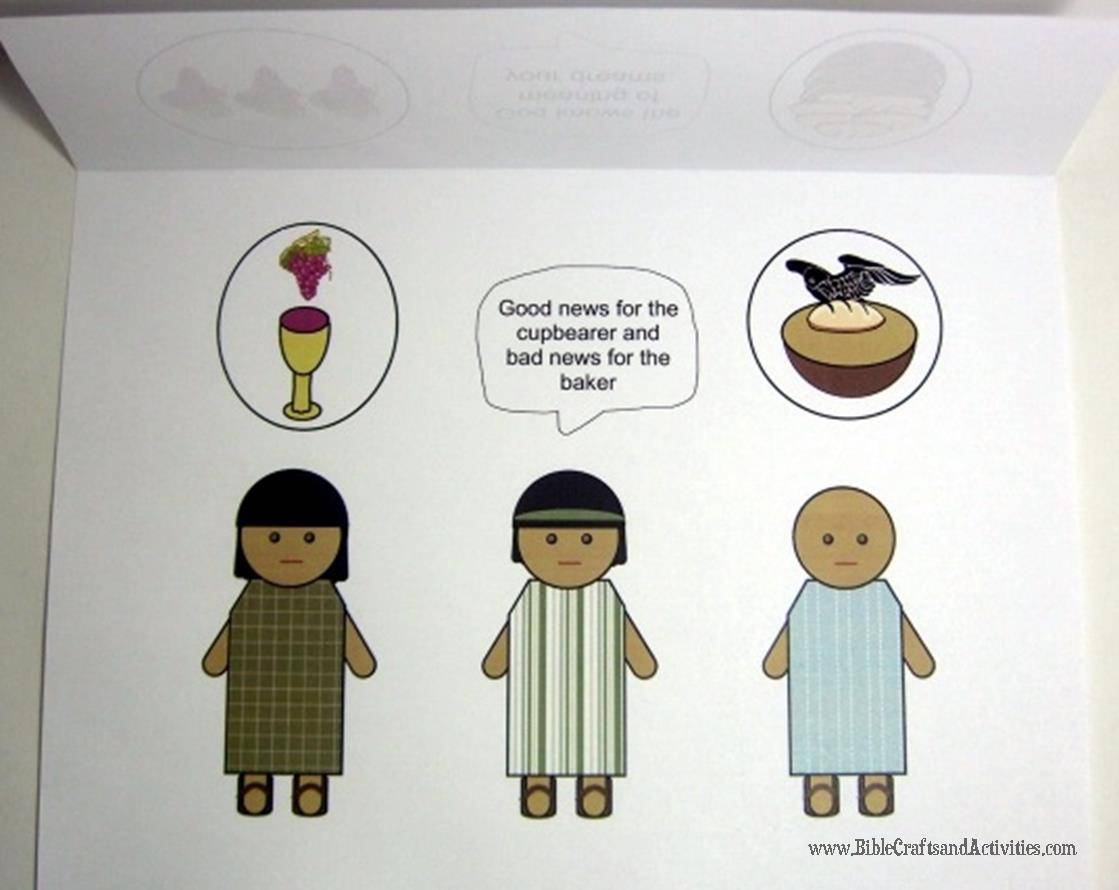 The craft I created for this story is a lift-the-flap to show the progress of the dreams and Joseph’s words to the prisoners.  Download the printable to create the craft here. 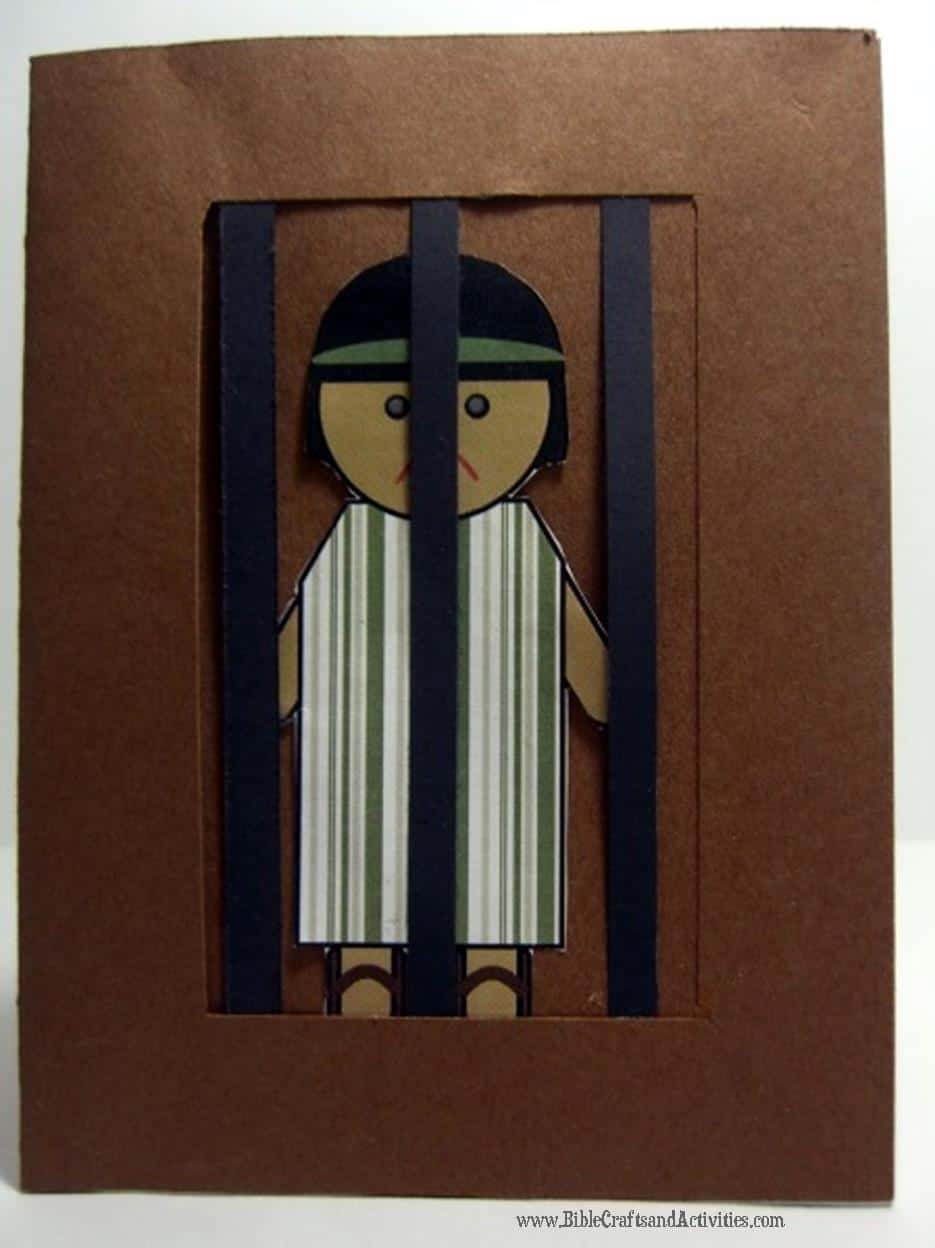 Joseph is falsely accused and lands in prison.  The printable shows a sad Joseph and provides instructions to create a simple jail cell.

5 Now Joseph had a dream, and when he told it to his brothers they hated him even more. 6 He said to them, “Hear this dream that I have dreamed: 7 Behold, we were binding sheaves in the field, and behold, my sheaf arose and stood upright. And behold, your sheaves gathered around it and bowed down to my sheaf.” 8 His brothers said to him, “Are you indeed to reign over us? Or are you indeed to rule over us?” So they hated him even more for his dreams and for his words.

Joseph Sold by His Brothers

12 Now his brothers went to pasture their father’s flock near Shechem. 13 And Israel said to Joseph, “Are not your brothers pasturing the flock at Shechem? Come, I will send you to them.” And he said to him, “Here I am.” 14 So he said to him, “Go now, see if it is well with your brothers and with the flock, and bring me word.” So he sent him from the Valley of Hebron, and he came to Shechem. 15 And a man found him wandering in the fields. And the man asked him, “What are you seeking?” 16 “I am seeking my brothers,” he said. “Tell me, please, where they are pasturing the flock.” 17 And the man said, “They have gone away, for I heard them say, ‘Let us go to Dothan.’” So Joseph went after his brothers and found them at Dothan.

18 They saw him from afar, and before he came near to them they conspired against him to kill him. 19 They said to one another, “Here comes this dreamer. 20 Come now, let us kill him and throw him into one of the pits.[b] Then we will say that a fierce animal has devoured him, and we will see what will become of his dreams.” 21 But when Reuben heard it, he rescued him out of their hands, saying, “Let us not take his life.” 22 And Reuben said to them, “Shed no blood; throw him into this pit here in the wilderness, but do not lay a hand on him”—that he might rescue him out of their hand to restore him to his father. 23 So when Joseph came to his brothers, they stripped him of his robe, the robe of many colors that he wore. 24 And they took him and threw him into a pit. The pit was empty; there was no water in it.

25 Then they sat down to eat. And looking up they saw a caravan of Ishmaelites coming from Gilead, with their camels bearing gum, balm, and myrrh, on their way to carry it down to Egypt. 26 Then Judah said to his brothers, “What profit is it if we kill our brother and conceal his blood? 27 Come, let us sell him to the Ishmaelites, and let not our hand be upon him, for he is our brother, our own flesh.” And his brothers listened to him. 28 Then Midianite traders passed by. And they drew Joseph up and lifted him out of the pit, and sold him to the Ishmaelites for twenty shekels[c] of silver. They took Joseph to Egypt.

29 When Reuben returned to the pit and saw that Joseph was not in the pit, he tore his clothes 30 and returned to his brothers and said, “The boy is gone, and I, where shall I go?” 31 Then they took Joseph’s robe and slaughtered a goat and dipped the robe in the blood. 32 And they sent the robe of many colors and brought it to their father and said, “This we have found; please identify whether it is your son’s robe or not.” 33 And he identified it and said, “It is my son’s robe. A fierce animal has devoured him. Joseph is without doubt torn to pieces.” 34 Then Jacob tore his garments and put sackcloth on his loins and mourned for his son many days. 35 All his sons and all his daughters rose up to comfort him, but he refused to be comforted and said, “No, I shall go down to Sheol to my son, mourning.” Thus his father wept for him. 36 Meanwhile the Midianites had sold him in Egypt to Potiphar, an officer of Pharaoh, the captain of the guard.

This simple booklet provides a reminder of Joseph’s dreams and his journey to Egypt.  My students enjoyed coloring the images and adding star stickers.  Download the printable for the booklet, cut apart the pages, color, and staple together.